In the serie of sculptures representing dying gladiators, today is the 'Wounded Warrior, sculpted by the French sculptor Pierre-Etienne Monnot, and located in the Capitolini Museum in Rome. 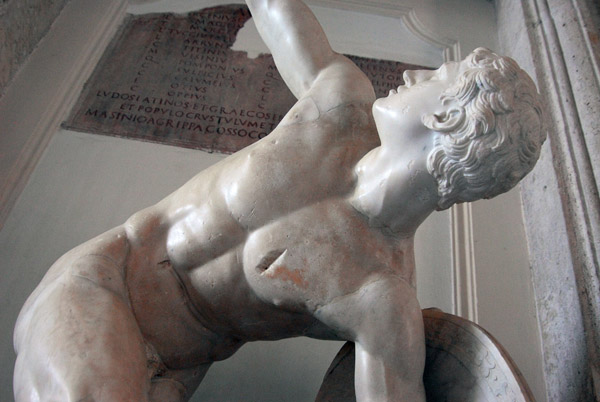 This sculptor, although born in France (1657) spent all his life in Rome from the age of 10 until his death (in 1733).
He got his first sculpture lessons from his father who sculpted wood, then by Jean Dubois, and may have worked a little in Paris for some main sculptors on some projects launched by the King Louis XIV.
Once in Rome, he joined quickly a circle of French sculptors, who gradually would get an excellent reputation during the first part of the 18 century, and got many commissions, not only for Italian monuments & churches, but also for English aristocrats, for whom he sculpted tombs monuments, allegorical figures for chapels, and mythological pieces.
He also went to Kassel in 1714, where he sculpted several statues, busts and a masterpiece consisting of colored marble bas-reliefs in the Orangerie at the Karlsaue.
Regarding today's sculpture, the Wounded Warrior, the origin of it is a restoration. Many sculptors indeed were asked to restore statues or damaged antiquities. Monnot received a marble torso which used to be a 'Discobolus', a copy made from the original Myron sculpture. 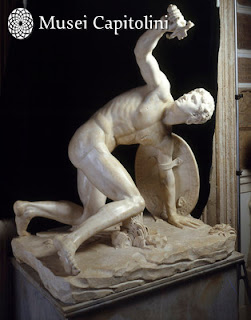 But Monnot transformed that figure (a liberty used at the Baroque period) to make it as the Wounded Warrior, ''who supports himself on his arm as he sinks to the ground''.
It is the Pope Clement XII who offered that sculpture to the Capitoline Museum. 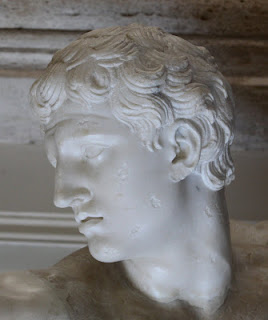 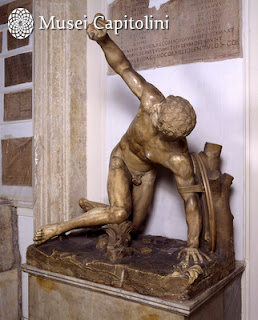 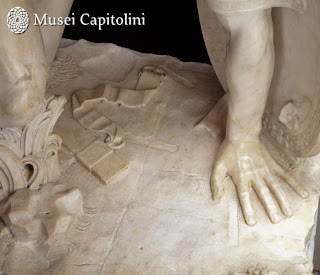 (This sculpture was seen last week in Rome by one of our regular reader from Paris, P., who kindly sent me a picture, together with a funny anecdote : the guide apparently did not liked when he tried to go at the back of the statue, to admire the other side, so here are 2 more pictures to help him!). 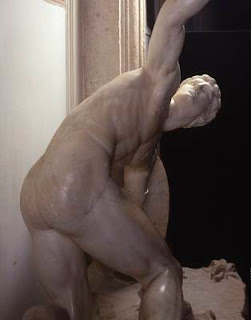 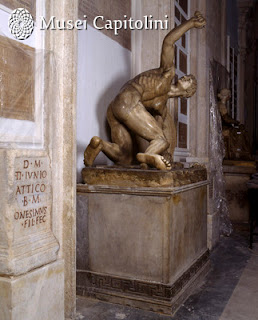 Together with this sculpture, today's bonus is the second marble sculpture at same Museum, showing one of the Niobide, also 'appreciated' by our reader! 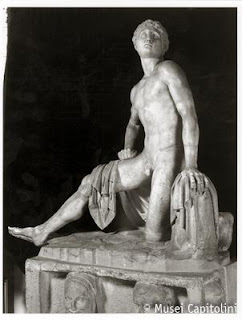 Antonio Canova (1) and his Perseus


We have previously covered in some detail another Perseus, the magnificent sculpture in bronze from Benvenuto Cellini, achieved in 1554. Today, lets have a look at the marble version executed 250 years later, by the famous sculptor Canova, and also a glimpse at Canova's life. 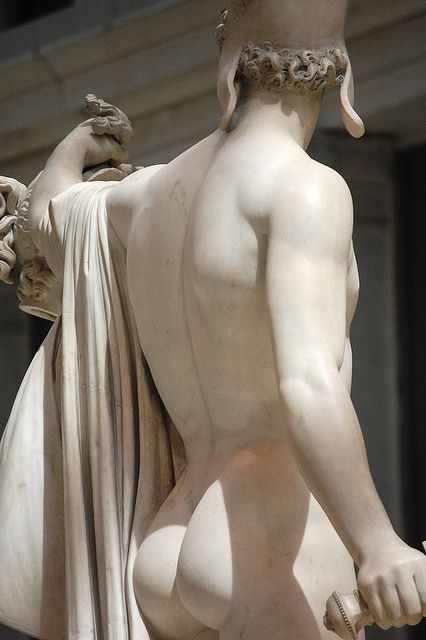 Canova got a rich heritage, in the sense that he was born in a family (his father, his grand father) of stone carvers. So he learned to carve marble already as a kid. Soon he is sent as apprentice by the Italian sculptor Giuseppe Bernardi Torretti, and later on he will study in Venice (Academia di Belle Arti). In Venice he got several awards, became famous among the modern sculptors, but still got lots of inspiration from Greek & Roman mythology. 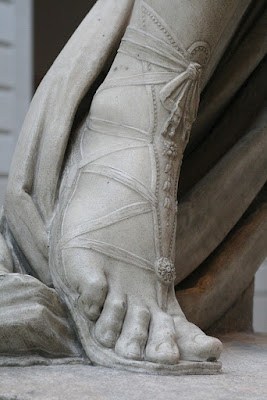 He is known to express lots of sensitivity in his marble sculptures, and was able to get a highly polished texture on his marbles, and to express the softness of the body. He became the perfect example of what was later called the neoclassicism. 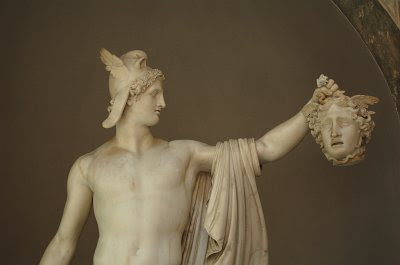 In 1779, he opened his own studio, and soon got his first large marble commission : a statue of Icarus and Daedalus (more details in a future post). Being very generous, he helped a lot of young artists in the need. Canova was also a painter.
He then travelled to Rome, where he studied in depth the Michelangelo numerous works. It is in Rome that he got the commission for Theseus and the Minotaur (more details in a future post).
It is said that ''by 1800, Canova was the most celebrated artist in Europe.''

What we would call today as 'marketing' was a regular and natural habit from Canova, indeed he constantly aimed at establish his reputation and make his work well known by publishing drawings (engravings) of his works. 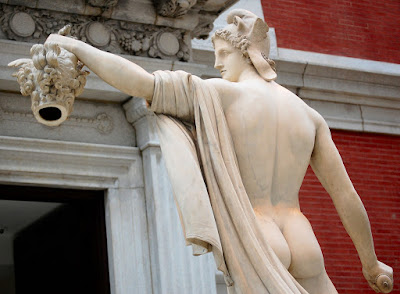 When he died, in 1822, aged 65, his heart was kept in a monument he created himself, in Venice, inside the Santa Maria Gloriosa dei Frari Basilica. His body though was buried in his birthplace, Possagno, in the Canoviano temple, where his brother body lays as well.
And it is said that his right hand is preserved in a vase, at the Accademia di Belle Arti in Venice. The ceremony was reportedly grandiose, to be compared with the one given by Firenze city at Michelangelo's death in 1564.

The original sculpture is located in the Vatican in Rome, Italy. Sometimes called Perseus Triumphant, sometimes called Perseus with the Head of Medusa. The statue was acquired by Pope Pius VII. An exact copy, in marble as well, was purchased in 1804 from Canova by the Polish Countess Valeria Tarnowska. That copy is located now in New York, at the Metropolitan Museum. Pictures below. 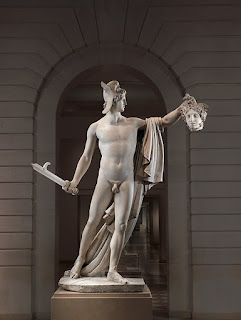 Canova apparently wanted to constantly surpass the classical statues.
He did not teach students or apprentices, but instead had a lot of workers who would prepare the rough statue he wanted to sculpt, using the '3 points machine' to copy a plaster model, and leaving just enough marble so that Canova could concentrate on the surface. For which he was famous. 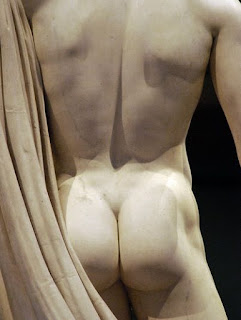 It is also said that some people were reading to him pieces of literature and historic texts while he was sculpting.
After the sculpting, he spent lots of time, like weeks or more, sanding it, using a special stones,  like 'pumice' and 'tripoli'. And for the nude parts of the skin, he would use a special patina to make the tone lighter. 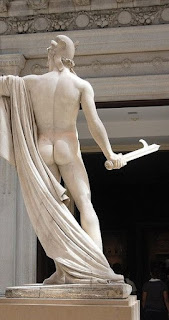 Sources :
MET NYC
Wikipedia
Posted by J-Chris at 6:00 AM