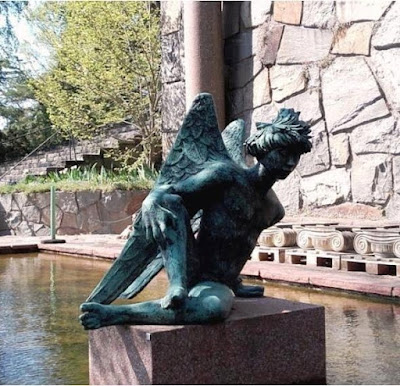 He loved to place his sculptures high in the air, on top of columns, or with discreet metal bars, so they look floating or flying in the air. Some of his sculptures are located in various places in Stockholm, although most are in Millesgarden, or in USA. 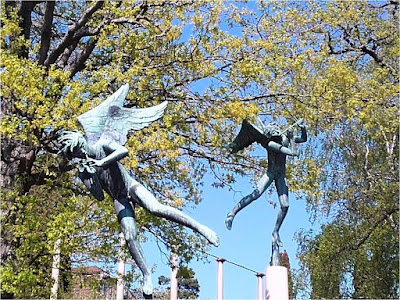 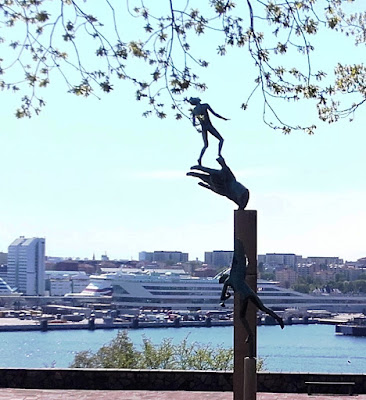 Millesgarden, name given today to the plot of land that Carl Milles purchased in 1906, is a beautiful setting, which took several decades to be achieved, between the house, the studio, the loggia, the various fountains, terraces, and gardens. It can remind Italy's Mediterranean coast. 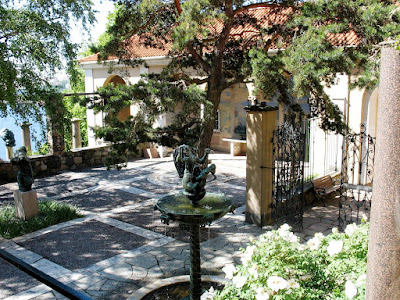 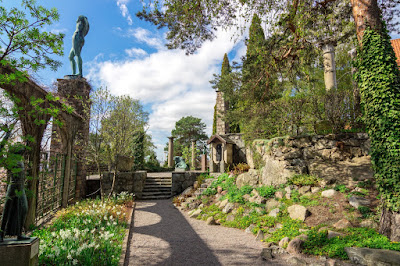 One of these fountains is the Aganippe fountain (1955), filled with muses (Carl Milles replaced them by young men) symbolizing arts and sciences: sculpture with a mini-Pegasus statue, painting with flowers, and music with a saxophone. 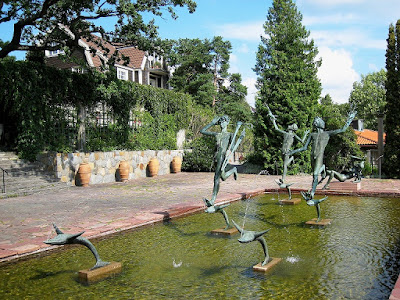 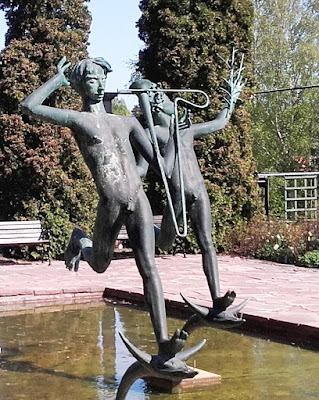 Carl Milles liked to place architectural elements in his garden, and he often acquired or gathered columns, marble archs, from demolished palaces, or hotels, etc. to place them at the entrance of stairs between 2 levels of terraces, or to support a sculpture. 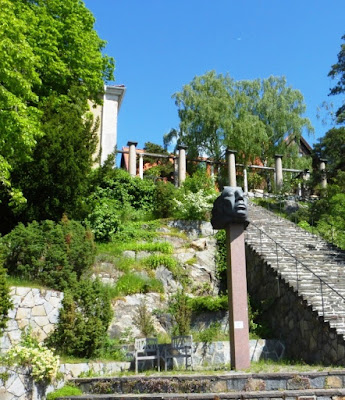 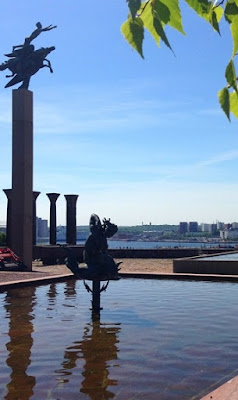 One example of this is the 'Wings' sculpture (1908), (actually I would call it Ganymède, the myth that inspired the sculptor, with Zeus disguised as an eagle abducting the beautiful young man) which is located on top of a column that originates from the King Gustav III Opera House, demolished in 1891. A copy of that sculpture is also visible on a Stockholm bridge. 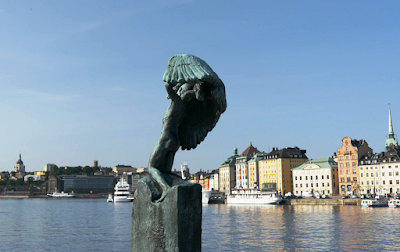 The lower terrace, overlooking the water, is a really large space, displaying superb sculptures, and initially planned to contain a swimming pool, meeting places, ice and skate rinks, waterfall etc. But these elements were not achieved, except the waterfall. 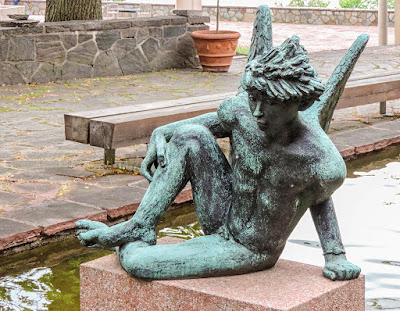 He sculpted many angels, like the Angel Musicians, and the Ice skating angels. 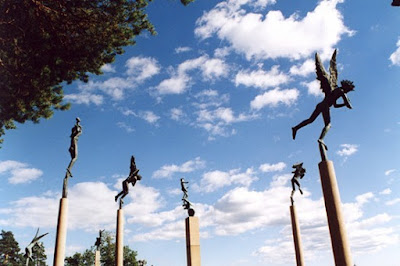 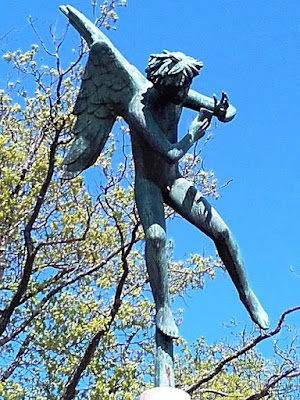 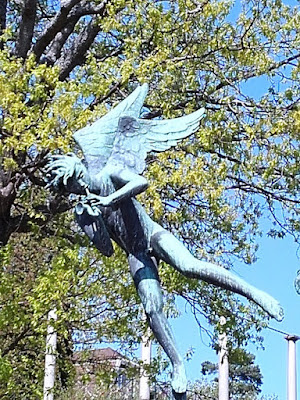 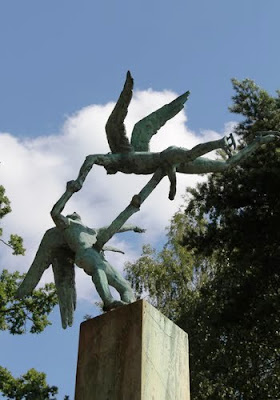 Another example of sculpture high on a column is the man and Pegasus (1949). The flying horse with the child of Poseidon. 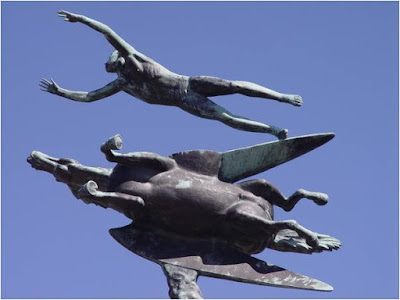 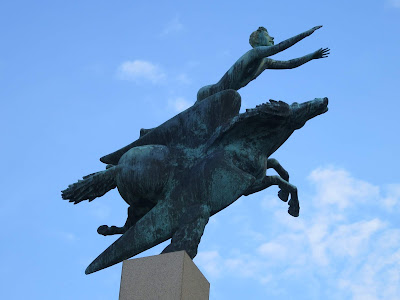 Talking about Poseidon, Milles sculpted this one, 7 meters high, standing naked (1930), holding a fish, and a shell. His hat is a shell, and his hait is composed of mussels. His face is quite unique. 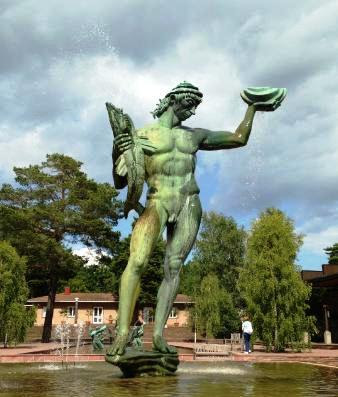 Another naked sculpture, the astronomer, looking towards the sky. His hands hold a compass (tool of the sculptor) and a sphere (actually a dodecahedron, a 12-sided volume, tool linked to space). This aims to illustrate the interest of Carl Milles for the life and human condition, as he started to study astronomy very young with his father, then purchased a telescope. His house contains also a tower used as an observatory. 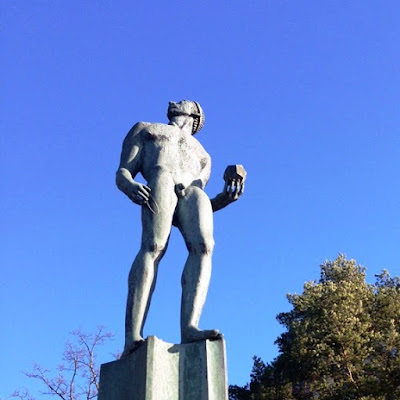 Here is another example of sculpture, located high in the sky, on top of a column : the hand of God (1940). 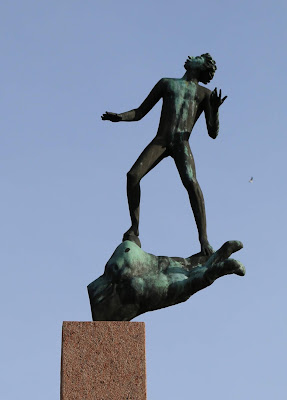 Carl Milles went to Paris when he was 22, studied the Fine Arts there and met Rodin. In 1903, then aged 48, he travelled to Holland, and to Belgium where he met the sculptor Constantin Meunier, who, at his surprise, had similar sculpting preferences. 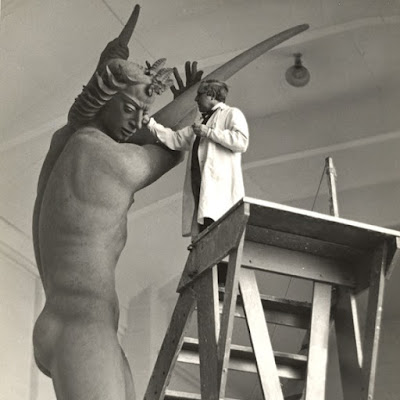 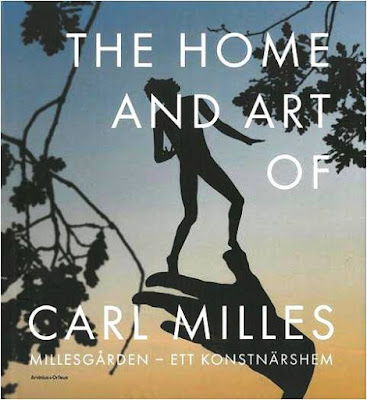