Below are some Icarus and Daedalus engravings. Engraving is taking out material, from glass, wood, stone so I link it to sculpture, although I agree it is very close to drawing!  Famous artists have depicted Icarus with that technique.
Here is a colored woodcut, made by one of my favourite engraver, Albrecht Dürer, in 1493, showing Icarus and his father flying, just before the fall of Icarus. 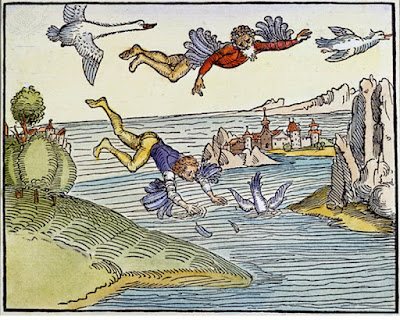 Here is an Italian engraving (school of Finiguerra) showing the Cretan labyrinth.
Maso Finiguerra (1426-1464) was an engraver (but also a goldsmith) working in Florence. Giorgio Giorgio Vasari declared that he invented the process of engraving to print paper, but it is now proven that Germany developed it before Italy. 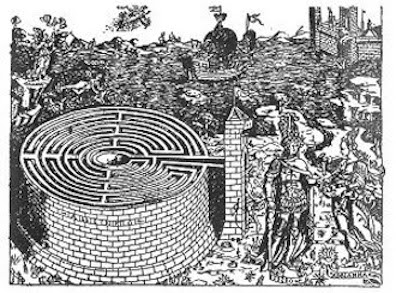 The engraving below was done in 1588 by Hendrick Goltzius, showing the Fall of Icarus. Based on a Cornelis Cornelisz van Haarlem design. 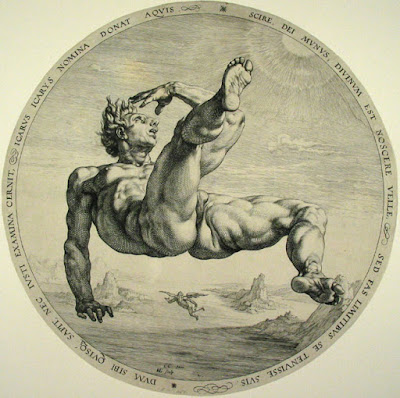 And here is a woodcut made by the German engraver Virgil Solis (1514-1562), to illustrate the Ovide's Metamorphoses book relating the myth of Icarus. He made 183 engravings for Ovid texts. This engraving is visible in Glasgow. He was influenced by the French engraver Bernard Salomon. 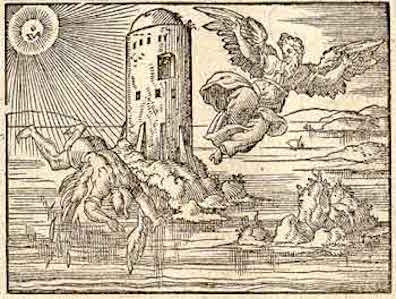 And the Salomon version here from 1557: 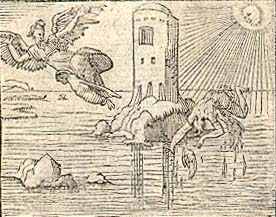 In France, we found one engraving from Bernard Picart (1673-1733), who was extremely talented even at a young age, possibly due to his father's skills and good practice at the Royal Academy. Indeed at the age of sixteen he got honors at the Academy of Paris. He established fully in Amsterdam, in 1710, which was a major center for both publishing and printmaking.
This engraving 'The Fall of Icarus' originates from The Temple of the Muses, a portfolio of sixty plates both designed and engraved by Bernard Picart. 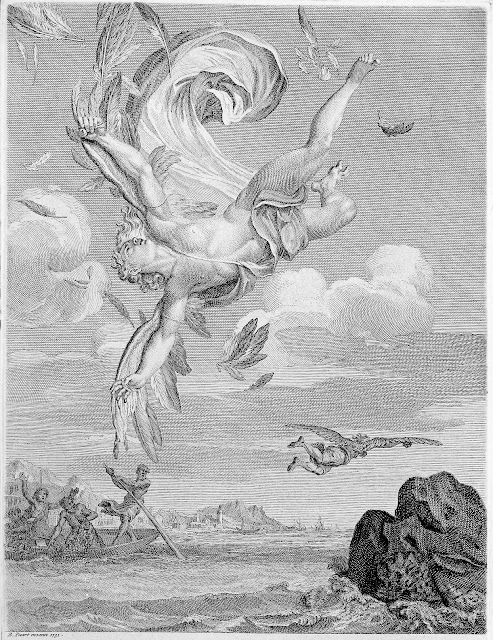 Since my childhood and the reading of Mythology Tales, followed by classical studies and trips to Greece, Italy and Egypt, I always kept an interest towards mythology.
So today you will see a first post about Icarus & Daedalus sculptures, which will be followed by one or two posts about more recent & contemporary sculptures of them. I will add my version of it as well, done in blue alabaster.

Below is a bas-relief done in the 17th century, with a Cretan labyrinth, visible at the Musée Antoine Vivenel in Compiègne (France). 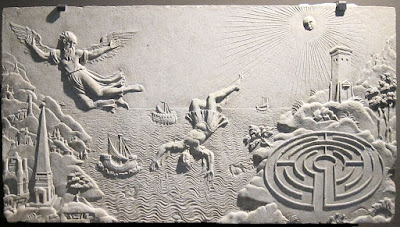 A short summary of the Legend (re-written/shortened from Wikipedia):

''Icarus' father Deaedalus, a very talented and remarkable Athenian craftsman, built the Labyrinth for King Minos of Crete near his palace at Knossos to imprison the Minotaur, a half-man, half-bull monster born of his wife and the Cretan bull. Minos imprisoned Daedalus himself in the labyrinth because he gave Minos's daughter, Ariadne, a ball of string in order to help Theseus, the enemy of Minos, to survive the Labyrinth and defeat the Minotaur.

Daedalus fashioned two pairs of wings out of wax and feathers for himself and his son. Daedalus tried his wings first, but before trying to escape the island, he warned his son not to fly too close to the sun, nor too close to the sea, but to follow his path of flight. Overcome by the giddiness that flying lent him, Icarus soared into the sky, but in the process he came too close to the sun, which due to the heat melted the wax. Icarus kept flapping his wings but soon realized that he had no feathers left and that he was only flapping his bare arms, and so Icarus fell into the sea in the area which today bears his name, the Icarian sea near Icaria, an island southwest of Samos.'' 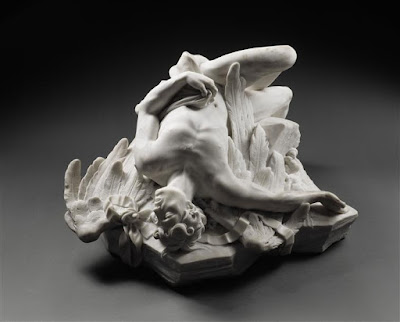 The fall of Icarus has been sculpted (and painted) numerous times. So I only suggest a very subjective selection of sculptures. Let start with a magnificent white marble sculpture achieved by Paul Ambroise Slodtz (1702-1758), the death of Icarus, displayed in the Louvre museum. 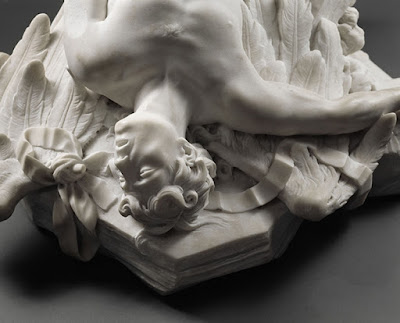 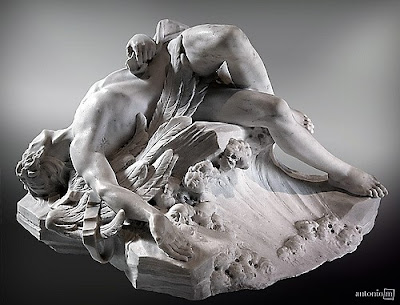 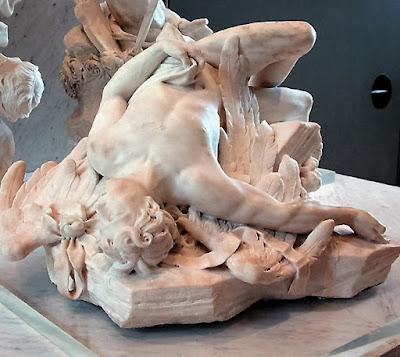 Here is a medallion from the 18th century, showing Icarus fall, the author is unknown. Located in the Louvre Museum collection in Paris. 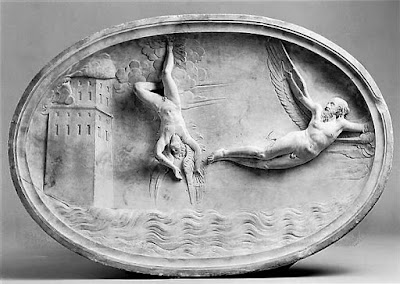 Below, the first masterpiece from the sculptor Canova, dated 1779, commissioned by Pisani, procurator of the Venetian republic. This 'group sculpture' in marble shows Icarus' father attaching the wings to his son's arms. This sculpture is visible at the Museo Correr in Venice (Italy). 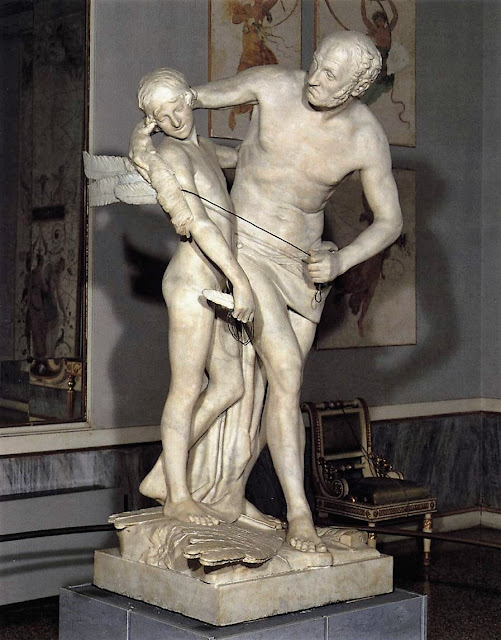 Not too long after that, the French sculptor Henri Joseph Ruxthiel sculpted the same type of scene, a bas-relief showing Daedalus attaching the wings to Icarus' body. It is located in the Ecole Nationale des Beaux Arts in Paris. 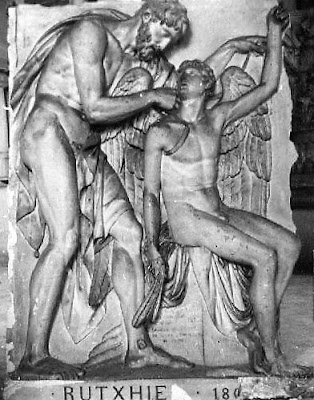 To finish today's post, here is a bronze sculpture from Sir Alfred Gilbert (1854 – 1934), son of professional musicians, who was an English sculptor and also a goldsmith (he was passionate about bronze casting techniques). This is a bronze with a very dark patina, placed on an ebonised wood plinth. 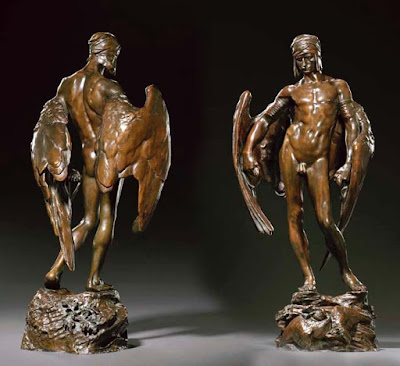 This art piece representing Icarus was commissioned by Frederic Lord Leighton in 1882 after the exhibition of Perseus Arming at the Grosvenor Gallery. Lord Leighton, a painter and a sculptor, was already mentioned in this blog here, and had already painted the subject of Icarus, see below. 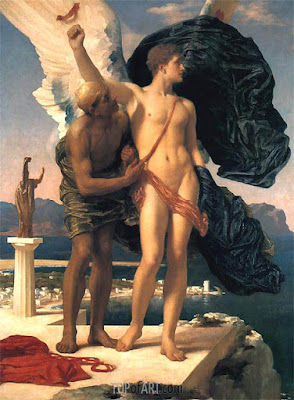