To remain on the spirit of gay love, I suggest for today's sculpture Nisus and Euryalus, the beautiful work from Jean-Baptiste Roman, French sculptor born 3 years after the French Revolution.

Nisus and Euryalus were two soldiers from Troy, and their love and frienship was so deep that they were ready to die for each other if needed. Nisus was older than Euryalus.


As Virgil wrote in his "Eneide' (that I had to translate years ago!) they were though warriors, serving under Enee. They are a typical example of the Greek lovers from that time, ie a teenager and a young man, whom many served in the famous Theban army. And would fight with more power than a lover to protect his lover ?

The sacred band of Thebes was a group of selected elite soldiers, made of 150 couples of male lovers. They won many battles during almost 30 years, like the famous one of Leuctra, between 378 BC and 338 BC. 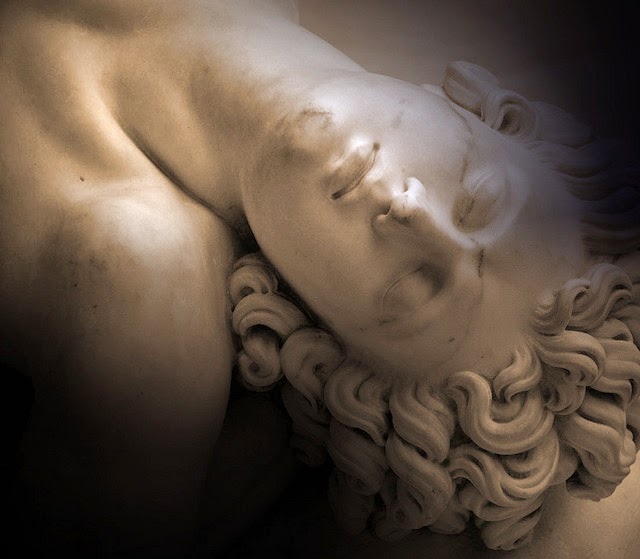 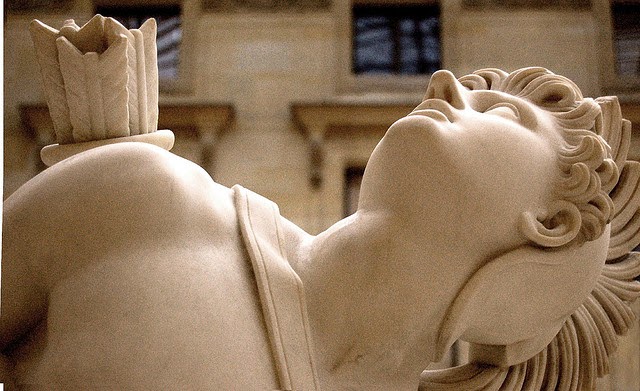 Nisus and Euryalus left their home to follow Enee in Italy. One evening, as Enee was not there, Nisus who was guarding the soldiers camp thought he could go inside the Rutules enemy territory to capture their chief. Euryalus approved the project, but did not want Nisus to go alone. He asked someone to take care of his mother, and they left together.


After having killed several sleeping Rutules soldiers, they met a Roman soldiers group led by Volcens. Nisus succeeded to escape, but Euryalus was captured, and would soon be killed. So seeing this from a distance, Nisus came back and asked to be killed instead of the young Euryalus. But Euryalus throat was cut, Nisus killed Volcens to revenge for it, before to be killed himself as he was embracing Euryalus.
This is the summary of Virgil story in the 9th book of Eneide.


The sculptor Jean-Baptiste Roman is born, and died, in Paris (1792-1835). Several of his marble sculptures are displayed in the Louvre museum, usually around mythology or historic figures.
He won two 'Prix de Rome', had sculptures commissioned by the king Louis-Philippe the first.
He also sculpted contemporary portraits like the bust of the French painter Girodet.
Jean-Baptiste Roman received the Legion d'Honneur in 1827.