Before carrying out the casting, it is necessary to bury the mold. As it is so high, and as the molten metal is to be poured from the top so that it reaches by gravity the lower parts of the statue, there is no alternative but to bury the mold at the foot of the kiln where the metal will be melted. In addition, it provides a protection against potential mold burst when the two tons of metal will be poured. And it also contributes to a slower cooling of the metal, as the mold is uniformly isolated, so it improves the chances for the metal to reach the most remote areas.

It took six months to bury the mold and build the huge furnace where the metal was melted. With  picks and shovels, to a depth of about four meters, the pit is ready. The mold is then lowered using a winch and a massive scaffolding. It was critical to avoid any shock to the mold as a crack would have forced to start over. After several attempts, Cellini, with its workers and with strong ropes, succeeds to position the mold in the bottom of the pit.The furnace itself was manufactured with the utmost care, taking into account the choice of bricks, their disposal, the general shape of the furnace, the volume needed to accommodate the entire metal, the necessary openings for pouring and combustion of the metal and the opening hole to pour the metal into the mold.
Five years had passed since Cosimo had commissioned Cellini 's Perseus . The tension was high with the Duke. Cellini was the subject of a conspiracy with his project that all qualified as foolish and undoable. Nevertheless, Cellini resists, his glory and honor is at stake if it fails, he would be banished from Florence and could no longer perform his job.The day of casting, the mold is buried with a mixture of soil and sand. The openings in the mold are extended with stoneware pipes so that they are not obstructed by the soil and allow the evacuation of air and gas. It is important to proceed with the casting as soon as possible before the moisture attack the mold. Ingots of copper, brass and tin (two tons in total) are arranged in the furnace. Cellini's entire team is at work . 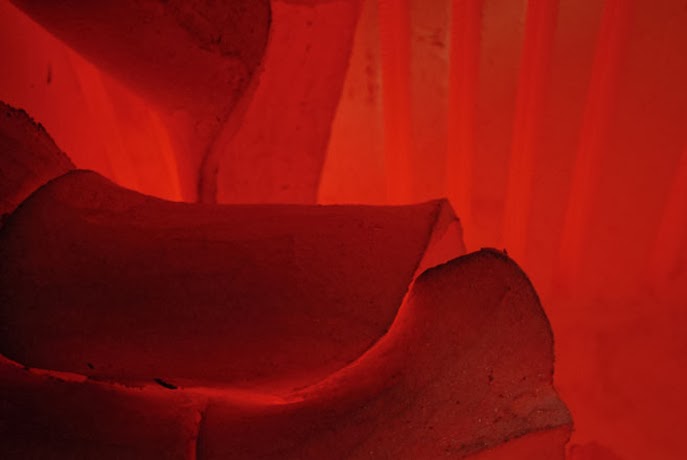 The fire is lit and the metal begins to melt and boil. But the oven gives off so much heat that the thatched roof starts to burn. The rain, which began to fall, helps to contain the fire, however, it threatens to penetrate into the mold, which must be avoided at all costs. A battle against the fire starts immediately.

After several hours of hard work, and Cellini close to exhaustion, the molten bronze began to coagulate, making it impossible to flow. Cellini throws into the furnace oak logs that generate more heat. He managed to break the bronze crust that formed on the surface, but the overheated oven cover explodes and revives the fire. They need to cast as rapidly as possible. The metal is too thick and does not flow fast enough. Cellini then added tin and finally the mold begins to fill. All the metal contained in the furnace is used. The mold is completely filled. The cast is completed.

After two days of cooling, the mold is cleread from the soil around it, and taken out from the pit with the same winch that was used to take him down. Cellini begins to break the mold to reveal the statue. As Cellini had expected, only the right foot of Perseus - the most remote area from the opening hole - had not received enough metal. The following months will be devoted to the completion of the foot, to cast the sword and helmet wings and sandals, to fix them to the statue, to carve the damaged details from the melting and then the surface polishing.

Cellini had planned to complete his work with a majestic marble base three meters high. He set four niches of about one meter on each side of the rectangular block. In the niches, he created and displayed statues of Mercury, Minerva, Jupiter and Danae with her son Perseus. 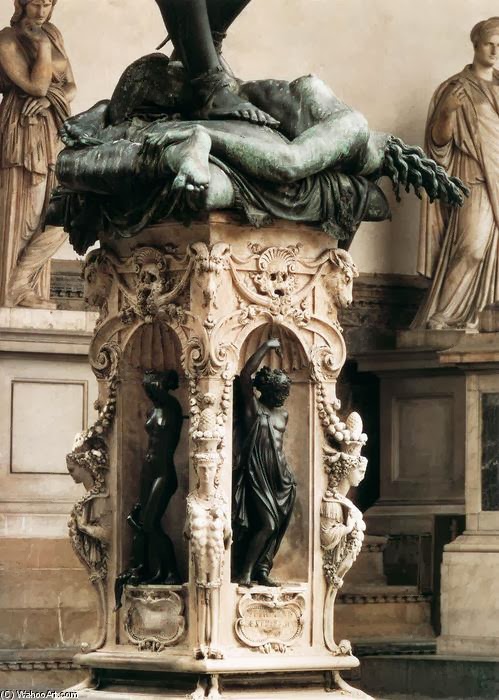 The block itself is carved with various motifs like shaped garlands, ram heads, shells and goddesses' busts. The finishing touch is a bronze bas-relief depicting Andromeda liberation by Perseus, on the stand base. 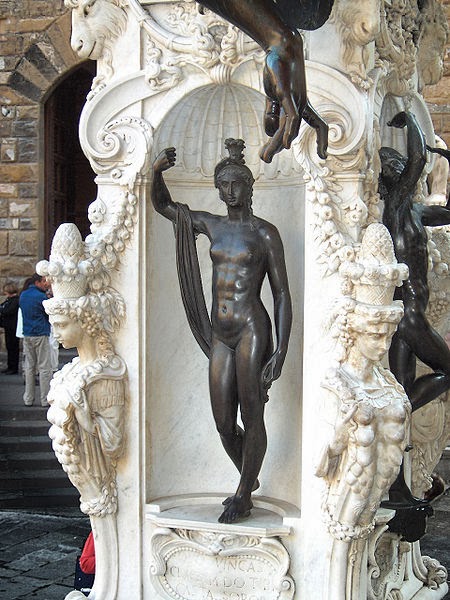 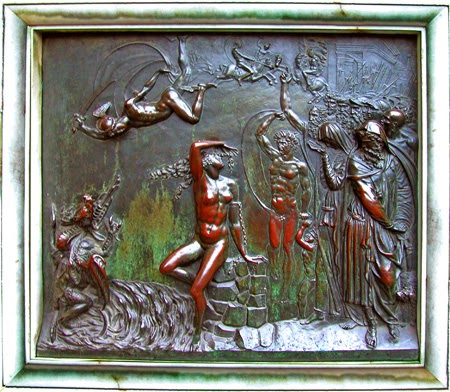 It took another five years to complete the base and install it under the arcade of the Loggia dei Lanzi. The transport of the three heavy sections, Medusa, Perseus and the base is delicate and difficult. It also attracts curiosity. Cellini resists the pressure to disclose his work until all pieces are linked together. The tarp covering the work is finally withdrawn on April 27, 1554, nine years after the order. Without ceremony, Perseus appears to the crowd of onlookers. It is triumph. Cosimo I even expressed his satisfaction at Cellini.

However, the payment for the statue is a cause of further tension between the two men, because of poorly conducted negotiations. Cellini will never get any more order of that importance. Now considered a genuine masterpiece and a technical major achievement, Perseus always throne to its original location. The work has been the subject of a restoration in 2000, for the 500th birthday of Cellini. 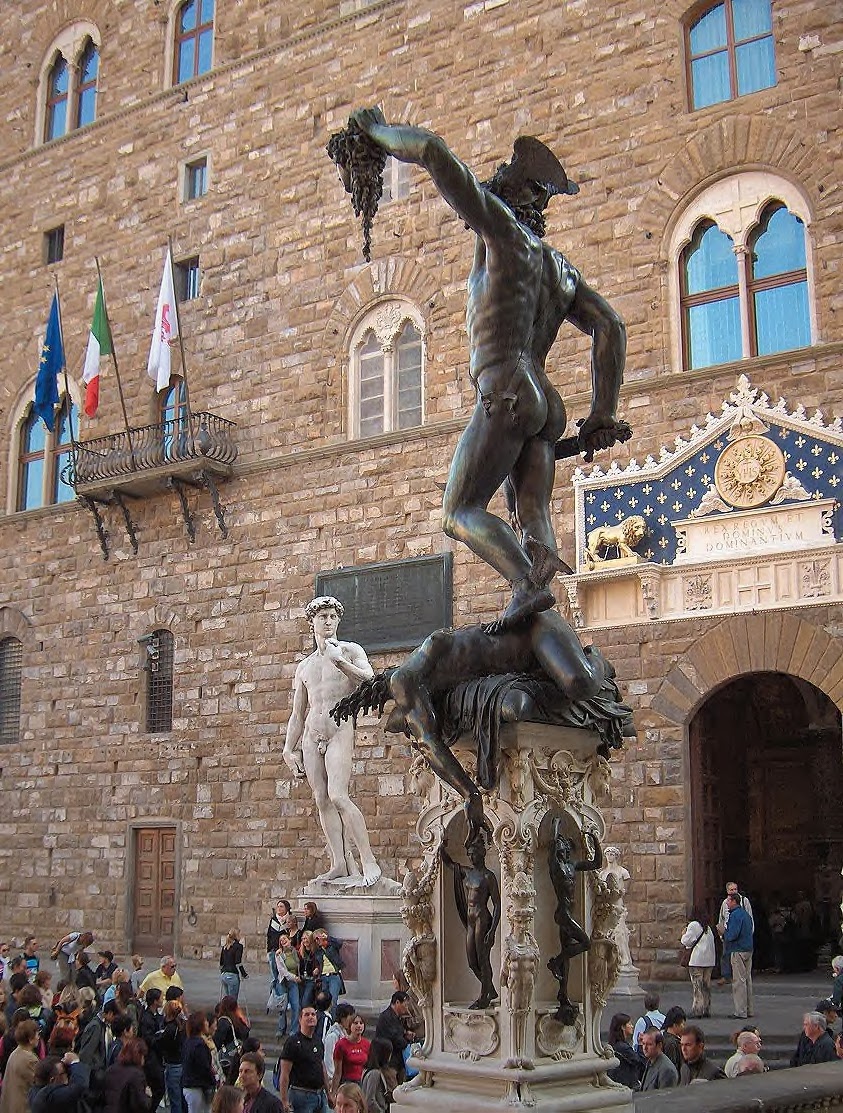