George Minne and his kneeling youths (2) 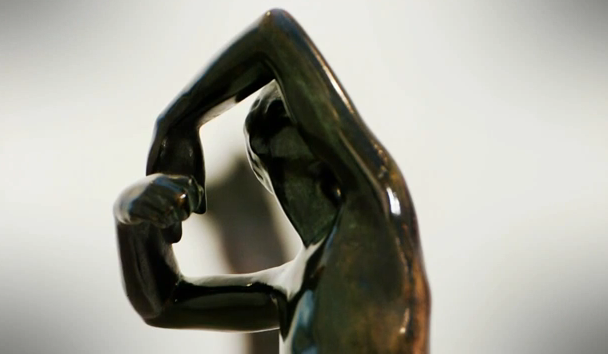 (Below biography extracts are from Helke Lauwaert work.)

''With the Fountain with Kneeling Youths, Minne established his name abroad, thanks to Van de Velde and Meier-Graefe, specifically in Austria and Germany. He first presented the Fountain with the five identical youths for exhibition in 1899 in Brussels at La Libre Esthéthique. After this, the work is to be seen in an altered form at the exhibitions in Vienna, Budapest and Venice.


At the Wiener Secession of 1900, Minne is one of the main artists in the exhibition and in addition to the plaster model of The Fountain are also 12 sculptures by Minne to be seen, in plaster, marble, bronze and wood, in addition to one woodcut. With his delicate, inwardly turning youthful figures, Minne closely adhered to the Jugendstil and the art-nouveau aesthetic of the fin de siècle in Vienna. His influence on artists such as Gustav Klimt (1862-1918), Oskar Kokoschka (1886-1980) and Egon Schiele (1890-1918) and later also on Wilhelm Lehmbruck (1881-1919) is unmistakable."


"In the appreciation of Minne by the Viennese avant-garde, the Jewish mecenas and industrialist Fritz Waerndorfer played an important role. In addition to works by Klimt, Jan Toorop (1859-1928)and Aubrey Beardsley (1872-1898), he possessed at the time the largest private collection of sculptures by Minne, plus a sketchbook of the artist. The sketchbook dates from ca. 1883-1888 and is now found in the Albertina in Vienna.

From 1900 on until World War I, Minne would be represented nearly annually at exhibitions in Germany: Berlin, Munich, Mannheim, Weimar and Dusseldorf. In leading, German newspapers such as Pan and Die Kunst, photos of his work appeared, through which his recognition abroad grew. With the help of Henry Van de Velde, the German industrial and mecenas Karl Ernst Osthaus gave Minne a project in 1900 for the Folkwang Museum in Hagen (now in the like-named Museum in Essen) to produce a marble version of the Fountain with Kneeling Youths. ''


"After the war, Minne gave lessons at the Academy of Ghent for a year. The fame that he had gained before the war in his own country has not diminished. In 1930, the first published monograph on him by Leo Van Puyvelde appears, supplemented with a catalog of his oeuvre. On 25 April 1931, Minne is given the title of baron. Various official projects, such as the Queen Astrid Memorial in Antwerp, were entrusted to him. Minne remained active as a sculptor and drawer.
George Minne died on 18 February 1941 at the age of 74. A Woman and Child by his own hand adorns his grave in Sint-Martens-Latem. Also, in the same year a retrospective exhibition of his work was held in the Palace of Fine Arts in Brussels.''

Video : The link below allows you to see several of George Minne drawings and sculptures.
George Minne video
Posted by J-Chris at 12:03 PM